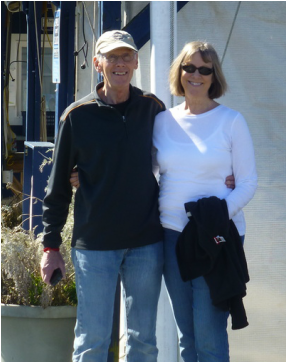 Dan and Lois
With easy access to expansive and scenic waters here in the Pacific Northwest, it is hard not to want to be out on a boat.  We have spent our share of years on small skiffs, taking our camping gear aboard and toting it to shore in many of the wonderful marine parks that dot our shorelines, both in the waters of Puget Sound and in the Gulf Islands of Canada.  Then, at the Seattle Boat Show in 2011, we fell in love with a Ranger Tug.  With the purchase of an R25SC, our boating lives were suddenly greatly enhanced!

We named our first Ranger Tug "HOKU KAI", Hawaiian for Sea Star or Star of the Sea.  She opened up new worlds for us, taking us to places we had only dreamed of visiting by boat, opening doors to new adventures and new friendships.  All of our HOKU KAI "Boat Days" are documented in our photo blog at www.bioaquatics.com/hokukai.

We spent a blissful five week stretch on HOKU KAI in the summer of 2014.  By the end of the cruise, we had come to the conclusion that it was time to move to the R27, a boat with amenities that would better meet our needs. We realiz﻿ed that﻿ we loved being out on the water for extended periods of time and that we would like to spend two and maybe even three months at a time cruising in the years ahead.  And so, at the 2015 Seattle Boat Show, we put a deposit on our next Ranger Tug.

Finding it hard to resist taking photos of all of the amazing sights that we encounter while cruising, we find we need a way to organize our growing accumulation of photos.  And so, we are creating a photo blog that combines our photos with our log notes.  It is our way of sharing our love of cruising with others.

NORTH STAR already has a history!  She spent her first year cruising Puget Sound and visiting boat gatherings under the name "THE BOAT GUY", with Chip Hanauer of hydroplane racing fame at the helm.  Chip used her to help promote year round boating activities in the Pacific Northwest, and together with his cameraman Sam, produced a series of light hearted videos that can be seen on YouTube.  And so, NORTH STAR really is a star!  We have some big shoes to fill as we take the helm of this boat.

THE FACTORY VISIT AND SEA TRIAL:

With a deposit on a boat that we have not seen, it is time to visit the Ranger Tug Factory in Kent.  We inspect the boat and make a list of items that need attention.  The following day we have a sea trial on Lake Washington.  Both Kenny and Andrew meet us at Coulon Park in Renton where an R25SC and NORTH STAR are at the launch ramp.  NORTH STAR looks great in the water!  Kenny takes us out and gives us our first introduction to her many features.  It is a beautiful day, we are thrilled to be on the water and on the boat, and excited to learn about the many new features that we didn't have on HOKU KAI. 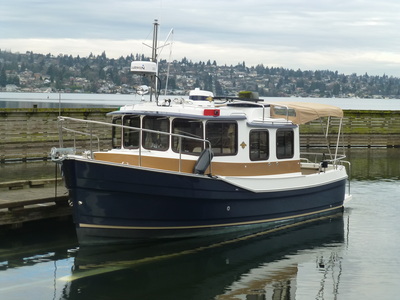 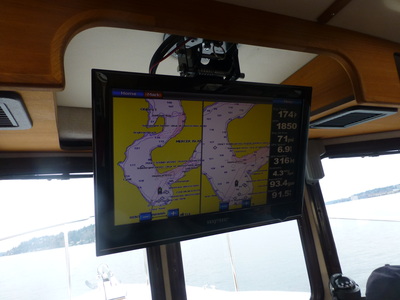 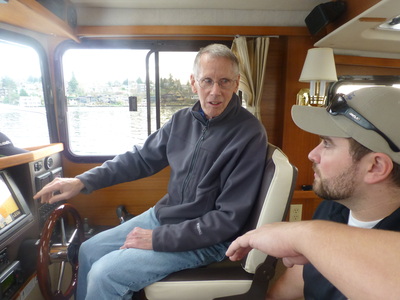 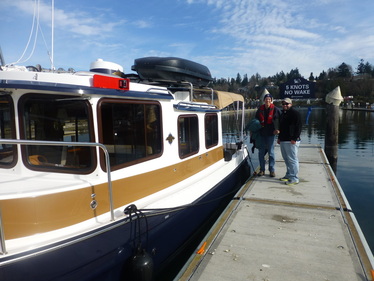 The day has arrived!  Tuesday, February 24, 2015 dawns with beautiful sunny blue skies and the chill of the night rapidly dissipating.  Kenny Marrs, Customer Service Representative from Ranger Tugs, is already waiting for us at the launch ramp of Swantown Marina in Olympia when we arrive at 10 a.m..  Our new boat, NORTH STAR, is in the water.  It's time for big smiles!  We are thrilled to be getting this boat and so happy to once again have Kenny doing the factory introductions.  In 2011, he was the one to teach us about the intricacies of our R25SC, HOKU KAI on her delivery day.

Now, today, Kenny gives us a review of all of the components of our new tug.  Improvements and amenities new to us:
And more!  Once again Ranger Tugs have provided us with a beautiful and functional boat.

Dan has Kenny share his tool bag with us so that we will know what we need to add to our own tool box.  With the addition of just a few items, we should be able to handle any problems that might crop up when we are cruising on our own - we hope!
Then, we are on our own with NORTH STAR!  We are off on our "maiden cruise" on Budd Bay, soaking up the beauty of this day, water sparkling and mountains clearly visible, feeling exhilarated to be back on the water and getting to know our new boat - familiar, yet different with her two extra feet of wonderful.  We have lunch aboard while drifting before returning to Swantown and introducing NORTH STAR to her mooring slip on C Dock.  It has been a stellar February day! 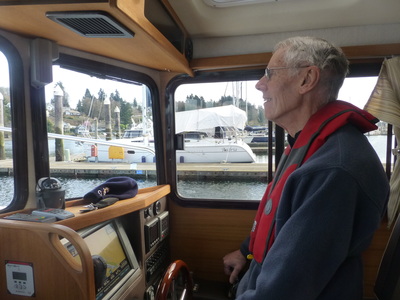 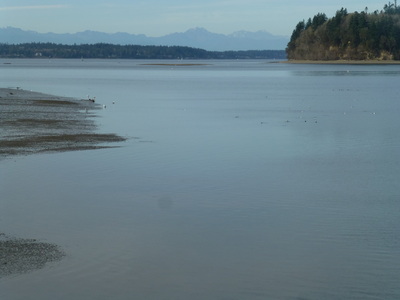 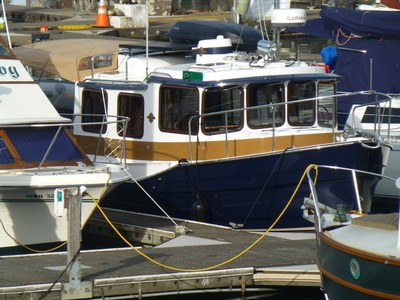 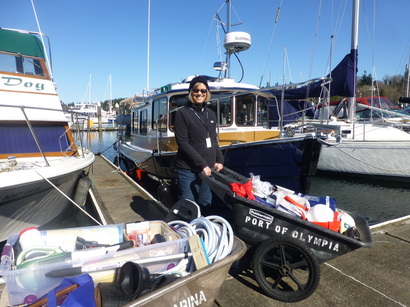 We have a garage filled with provisions from HOKU KAI and spend a day moving everything to NORTH STAR.  We have bedding, including a three inch thick memory foam mattress topper, towels, pots, pans, dishes, silverware and utensils, and even some basic food items to move aboard. There are folding chairs and a folding teak table for the cockpit, and a Magma grill.  Then there are tools and boat related items such as binoculars, guide books and charts.  And of course, the toys - oars for the dinghy, a pump to inflate it, the Torqedo electric motor, etc.

I give all of the interior teak surfaces a fresh coating of Daly's SeaFin teak oil.  Dan mounts a paper towel holder on the ceiling just above the sink, a small spice rack on the wall over the stove area, and a hook for potholders.  A coat hook is installed just inside the entry door, another hook added in the head for hanging a cosmetic bag that holds items such as sunscreen and toothpaste.  A cup holder is added to the dashboard on the port side along with a knob on the glove box door.  A towel bar is added in the cave area.  NORTH STAR is being transformed into OUR boat!

NORTH STAR gets her name

We choose the name NORTH STAR for this boat for several reasons.  We don't want to use HOKU KAI again even though it is a name that we loved using with our R25SC.  We found that for most people the name was confusing, hard to remember and hard to pronounce.  With the desire to have a classic name for a very traditional looking boat, and with the desire to still keep "star"  in the name, NORTH STAR rises to the top of our name list.  It is a name that can have lots of meaning, referring to either the boat or the celestial North Star.  And, the name should come through clearly on radio transmissions!

As an aside, Dan lived on a boat called "Little Bear" in his grad student days in Hawaii.  "Little Bear" is the constellation Ursa Minor, also known as the Little Dipper.  The North Star is a part of this group of stars.  So, for Dan, there is a connection between  the boats "Little Bear" and NORTH STAR, albeit in a round about way.

Once again we get our name graphics and boat registration numbers through BoatUS.com.  We are place the name on both sides of the hull near the bow, just aft of the registration numbers.  The hailing port goes on the stern.  The letters are gold metallic with a black shadow. 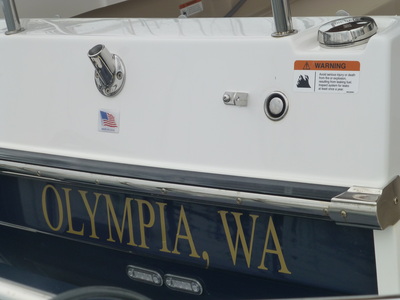 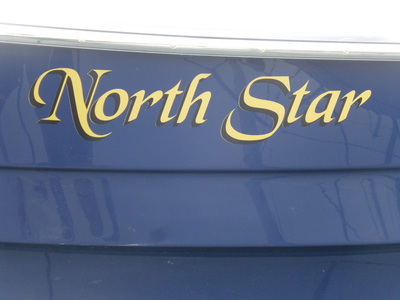 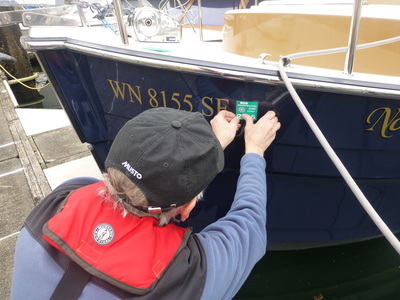 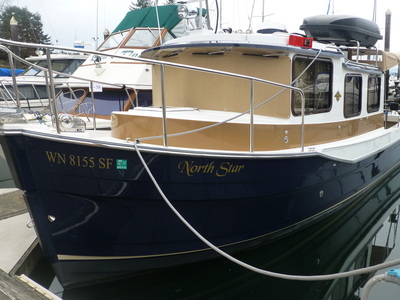 We will have an official Naming Day ceremony with family in connection with one of our Boat Days.